The name of the project refers to the goal of the project, an interactive virtual reality HUD. HUD stands for Head-up Display. Head-up displays are likely to be known to gamers, but will be briefly explained below.

Video and computer games use a HUD as a display area on the edge of the screen to inform the player continuously about his game data. These include, for the character often vital statistics such as the current state of health, attributes, armor level, ammunition overview or the current position on the playing card. However, these ads of the HUD should not adversely affect the gameplay, for example, by obscuring strategically important elements. A good HUD is virtually unnoticeable to the player in the ongoing gameplay, but is still accessible at a glance as needed. An example would be that the player can easily focus on a fight in the gameplay, while still keeping an eye on the health of his character or other important stats. For many game developers, designing a good HUD is a rewarding challenge. 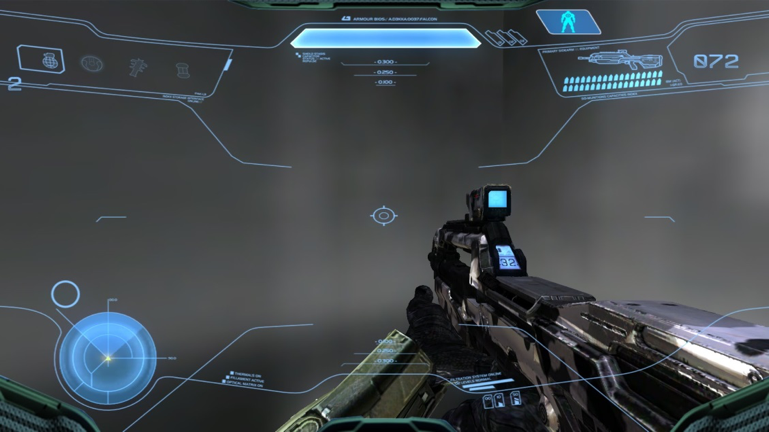 Example for a HUD in a computer game – Source: https://i.ytimg.com/vi/KKNDArhV1Kw/maxresdefault.jpg

We now want to transfer the concept of a self-developed HUD to the VR environment of the VRLab of Reutlingen University. For this purpose, we not only want to manage the respective display elements, but also make the display interactive. We use eye-tracking cameras to detect if the user’s eyes are focused on one of the elements. With different, so-called Blinzeln commands can then be ‘clicked’. Once the goal of a prototypical implementation of an interactive VR HUD has been achieved, the second step would be a usage framework. From the work done, a framework should be derived to facilitate the use of the iVR-HUD, at least for future projects in the VR-Lab Reutlingen.

Later, with the knowledge gained may even be immersed in the field of augmented reality. This is understood to mean a composite usage view that combines a real scene viewed by the user with a virtual scene. The virtual scene is generated by the computer and contains additional information about the currently considered real scene.

The hoped-for gain in the VR-HUD’s field could of course be interesting for other applications than computer games. A conceivable application would be the following: A motorcyclist could be enabled to use all the advantages of the infotainment systems familiar from cars without having to take their hands off the handlebars to operate them. In addition, we hope that the work on a prototype will lay the foundation for further projects and perhaps even related biographies at the university.