Posted on 4. April 2011 by admin Posted in , Technik, VRLab Projekte

Since the beginning of winter semester 2010, the VRlab team is also working on two multi-touch systems. One of the two is a rear projection system with a vertical screen area. Because of its shape the system is named Cube. The Eyevis GmbH, a leading manufacturer of large screen systems, gratuitously provided the Cube for research purposes. The rear projection Cube is usually used as an output device only. The current work of the VRlab team is to extend the Cube to a multi-touch device by using low-cost components. These components are donated to the students by Eyevis.

The multi-touch functionality is implemented by using the rear diffuse illumination approach. Infrared LEDs, which are attached in the interior of the Cube, illuminate the projection area as homogenously as possible. A high resolution camera with a high frame rate and an IR bandpass filter detects only the diffuse light, reflected by objects on the projection area. 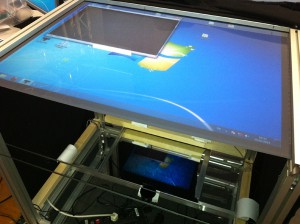 The same approach is applied in the second system, the multi-touch table. The only difference is the horizontal touch surface. The hardware components are provided by the university.

Future work of the VRLab team will be the development of applications for both multi-touch systems.